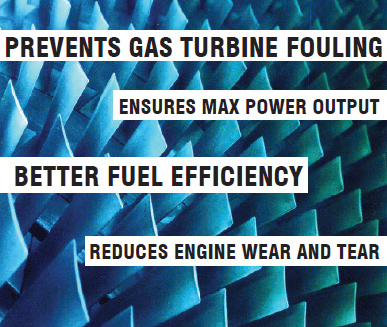 Regular on-line and off-line washing is known to provide:

Investigation and trials by the US Military between 1993 and 1996 proved that on-line washing with correctly formulated water-based detergent could substantially fully restore power to 100% of the original. The US Military also concluded that on-line washing was intrinsically more cost effective; while at the same time it totally eliminated the effluent disposal problems. Downtime for engine cooling was abolished and the period between necessary gas turbine shut-downs for off-line washing (crank-wash) would be extended, thus reducing costly downtime and production losses.